Tweet
The blues is a musical style created in response to the hardships endured by generations of African American people. It originated in the rural Mississippi Delta region at the beginning of the 20th century. Descended from earlier work shouts (arhoolies), blues is primarily a vocal narrative style featuring solo voice with instrumental accompaniment. Blues has contributed significantly to the development of jazz, rock music, and country and western music. 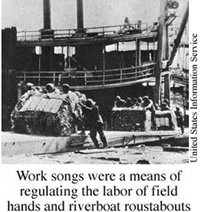 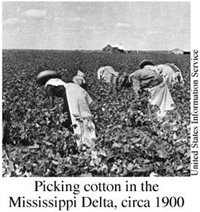 By the 1920s, the blues style had acquired its distinguishing characteristics of text, harmonic structure, and melodic shape. Blues lyrics contain a number of three-line rhymed stanzas in which each stanza consists of a line of verse which is repeated and then concluded with a final line. Harmony is based on a repeating blues chord progression, with a 12-bar pattern using the three major chords of a scale. Each stanza of text is set to one 12-bar chorus, with the typical blues ranging from four to eight stanzas in length. Melody is strongly influenced by "blues notes that sound like "bent" or flattened third, fifth, and seventh notes of the major scale. Blues notes have a bittersweet emotional impact. Although vocals are the focus, performers usually improvise instrumental solos over blues chord progressions. In addition, performers can also contribute improvised "fills" at the end of a sung line in a kind of "call and response" style. One musical innovation was the development of the "bottleneck slide" style of guitar playing, which consists of scraping a knife or glass bottleneck up the guitar fingerboard to simulate vocal moans and slides.

The earliest blues, known as country or delta blues, were a product of the 19th-century Southern rural experience, especially after emancipation. Itinerant singer/guitarists (or harmonica players), generally men, traveled from one community to another singing about love, freedom, sex, and the sorrows of life. Important early musicians include Charlie Patton, Son House (who developed the bottleneck slide technique), and Robert Johnson.

As rural African Americans migrated to urban areas such as Memphis and New Orleans in search of work, blues gradually became more of an urban phenomenon. Classic or urban blues featured a male or female singer usually accompanied by a piano or whole jazz combo. Capitalizing on the increasing popularity of urban blues, the music industry began publishing and marketing arrangements for blues compositions such as W. C. Handy's "St. Louis Blues" (1914). These songs became so successful that many popular songs that were not actually blues simply added the word blues to the title to ensure their popularity. New York vaudeville singer Mamie Smith's 1920 recording of "Crazy Blues" launched the "race recording" industry, which targeted blues and jazz directly at the African American audience. These recordings proved popular with a larger American public as well, and blues recordings by performers such as Bessie Smith, "Empress of the Blues," Jelly Roll Morton, Gertrude "Ma" Rainey, and Louis Armstrong dominated the musical landscape. Throughout the country blues could be heard in small dance halls, barrooms, rent parties, and juke joints, where new styles such as "barrelhouse" and boogie-woogie were performed by pianists such as Clarence "Pine Top" Smith. 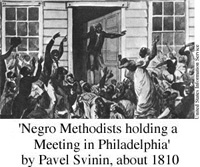 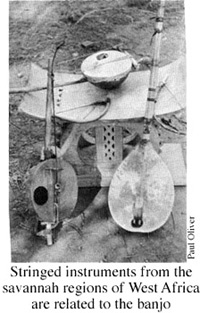 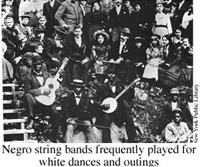 After World War II, the center of blues activity moved to cities such as Chicago, where musicians such as Muddy Waters, Riley "B. B." King, and Buddy Guy intensified the sound by amplifying the guitars and adding more emphasis to the drums. During the 1950s this style was adapted by white musicians as well, and rhythm and blues hits were often rerecorded ("covered") by white musicians such as Elvis Presley and Bill Haley, transforming rhythm and blues into rock and roll. A decade later British musicians such as the Rolling Stones, Led Zeppelin, and Eric Clapton returned to the blues roots as the source for their heavily amplified hard rock style. Although much of the energy of blues has been channeled into rock and rhythm and blues styles, traditional blues musicians such as John Lee Hooker, Etta Baker, Junior Wells, and Buddy Guy enjoy successful careers. Blues has also developed into a major force in contemporary music through the rock-edged style of Robert Cray, as well as roots-oriented jazz by musicians associated with Wynton Marsalis (see Marsalis, family), the zydeco sound, and some rap groups.