Irene lays the foundation for melodic rock playing with a primer on scale tone basics, triads and melodic fills.. then provides an in-depth look at how to apply these principles with rock-solid technique, articulation and phrasing. This lays the bedrock for the final leg of this course, where we learn to compose our ideas with thoughtful application of melody, harmony, tension and release, and elegant motifs. And finally, we wrap up the course with 4 awesome examples of how to apply these concepts in a musical setting.

Suited for guitarists of all skill levels, our emphasis will be on taking you from a "noodler" to a focused, articulate player with more refined note choice, intention and style. Learn more or start the course with membership, or get lifetime access with purchase.

Stream online, plus all other courses with membership.

Black Friday Deals - Save $100 on this Collection 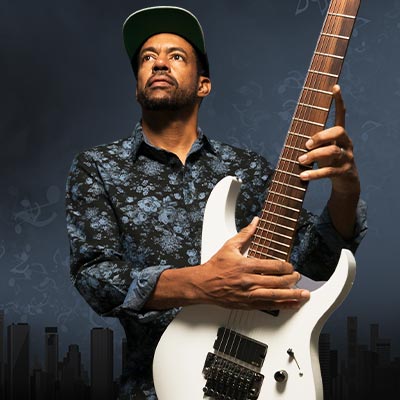 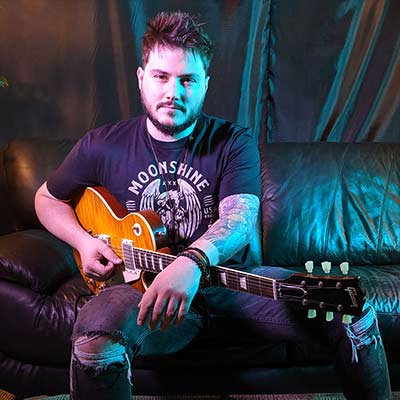 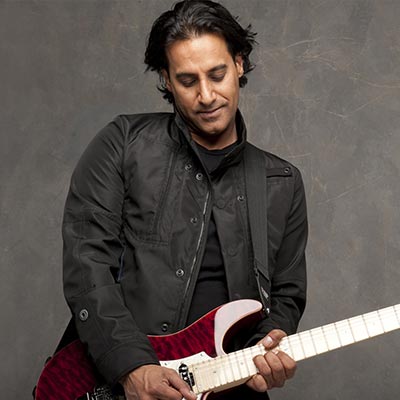 This course is a part of our Rock Course Collection, featuring 4 artists addressing this popular topic. Featuring courses from Tony MacAlpine, Tony Martinez, Irene Ketikidi and Prashant Aswani. Save $100 on this Collection during Black Friday.

Break out of dull patterns and learn to play with intention, purpose and emotional competence.

This is a full, 10+ hour course featuring 30 step-by-step lessons with full supplemental content.

Course filmed with 6 cameras and stream in awesome 4k video quality and downloadable in 1080p.

Tabs are also provided in Guitar Pro and PDF formats. All tabs are fully downloadable to your devices.

Know what to practice after each lesson with guided suggestions, tabs, jamtracks and more.

Adding a melodic theme on top of a chord progression, or writing a solo that you are proud of can be challenging. You might find yourself playing familiar lines that comes easy to your fingers, and not making meaningful statement to the song. Irene aims to unlock the scale concepts, phrase articulation, and lead technique which help develop your own unique creative style. This course offers 30 lessons covering 10+ hours of material in step-by-step, digestable presentation.

Move from the beginner mentality of mindless scales and note choice, to playing notes with purpose, intention, and the emotion you are attempting to convey.

Learn to sing your notes and attack your lead lines with focus articulation and meaningful phrasing ideas. Translate your voice to the instrument with these ideas.

Move "what is in your head" to what comes out of your instrument by merging our previous ideas, and adding melodic motifs, call and response, and more.

Lessons in this Course
1

In this first lesson, Irene gives us an overview of her course, laying out her plan to help you create melodies using your voice, bring those melodies to your fingers, add expression, play with different dynamics and shape your guitar tone with both pick and fingers. You'll then be able to apply all these concepts to your improvising as well as your original music!

Back to Basics: The Blues Scale

First things first - let's get back to some basic foundations that will come in handy down the road in this course. Irene starts with the blues scale in different positions and different string sets.

Back to Basics: The Dorian Scale

The Dorian scale is one of the most widely used minor scales in any guitarists toolkit. Irene helps us learn to use this critical tool in different positions and string sets.

Back to Basics: The Mixolydian Scale

The Mixolydian scale provides us with interesting tonalities bordering on exotic at times. Getting this foundational scale under your fingers in different positions and string sets will serve you well later in this course!

Mixing and Merging the Three Scales

Irene's selection of the three previous scales was not by accident! These widely used scales will make up a good portion of any rock guitarist's arsenal. In this lesson, Irene takes what we've learned so far and combines the scales for some unique tonalities!

Back to Basics: Major Triads and Melodic Fills

One of the easiest ways to explore melodies is to use the notes surrounding your triad shapes. This lesson helps us explore some major triad shapes and neighboring notes we can access quickly and easily.

Back to Basics: Minor Triads and Melodic Fills

Now we look at the minor triad shapes and neighboring notes that we can use to create cool minor melodic fills.

Back to Basics: Lead Picking Position

Let's look at some basics of the picking hand. Getting this hand in the correct position for lead playing will help you execute all the scales and melodic ideas Irene will be covering in this series.

Back to Basics: Fingerpicking Position

Now it's time to relate our voice to the scales that we know, and in turn our voice will be the vehicle that gets melodies from our head to our fingers!

In this lesson, Irene takes simple 2-bar melodies over chord progressions - singing them first, then bringing them to our fingers.

Irene shows us a sliding exercise that will help us learn our scales all on one string, plus help us learn to be accurate when sliding notes on the fretboard.

Bending can add vocal-like qualities to your playing. Using whole and half step bends alike, Irene shows us how to apply these bends to some of the melodies we've already created.

Legato playing is not only a speed tool, but a tool for getting a different kind of tone from your fingers and your strings. In this lesson, Irene explores the use of hammer ons and pull offs with your fretting hand, without the use of a pick.

Dynamics can be a key component to becoming expressive with your melodies. Irene applies some dynamic expressive techniques using our fingers to the melodies we've already created.

The strings and pickups you choose has a great impact on your tone, dynamics and articulation. Irene takes a look at some different pickup and string combinations that can help you achieve the desired sound.

Diving deeper into articulation, Irene shows us the effect that staccato or legato playing can have on our expression. She also shows us a technique called 'skank' picking.

One more layer of articulation brings us to octave melodies and tapped harmonics. Use these techniques to add another dimension to your expressive melody playing.

Build Up or Break Down Melody

In this lesson, Irene shows us how to build up a melody from a very simple idea, and vice versa - break down a more complex melody to it's very core components.

Straight, Shuffle and Laid Back Feel

Exploring different feels is the name of the game in this lesson. Change feels while only playing to a click, comparing the differences in mood and sound.

Writing good melodies is not only about the note choices, It's also about the rhythmic phrasing, and recurring rhythms you come up with. Irene shows us how to create a rhythmic motif that will make our melodies and phrases more memorable.

Call and response is a tried and true method to melody and motif writing. Using the motif we explored in the previous lesson, let's develop a 'response' to complete the musical thought.

There are different ways you can use call and response, and one of those ways is to build tension. Learn how to use variances like increasing the difficulty of your technicality, to help you create tension in your motifs.

Melodic ideas can come to you in different ways. Using arpeggiated chord progressions can be one way to explore melodies that are living very near to your chords!

In this lesson, Irene uses the 7th chord arpeggios we learned in a previous lesson to create movement and a key root chord. She then adds the triad approach to get that intervallic playing sound.

Now it's time to practice intervals so we can learn the differences between sound and feel. Irene takes a look at 3rds, 4ths, 5ths, 6ths, 7ths and octaves in the Dorian scale.

Join Irene for the first of three solos composed for this course. First up is 'Beautiful Mind'. She will explain the concepts used, add a slow demonstration, and an 'at tempo' performance.

The second of three solos is 'Cool Run'. Irene breaks down the techniques and concepts she uses in this melodic solo.

Now for solo number 3 - 'Blacktop'. There is a ton of useful techniques, concepts and expressiveness in this solo! Learn the solo, but more importantly, apply the techniques to your own playing!

Part two of 'Blacktop'. Irene teaches us the remainder of the solo, and gives us a chance to practice it with her.

Irene Ketikidi is a force to be reckoned with in the world of instrumental rock guitar. Her solo album "Martial Arts & Magic Tricks" (2013) received excellent reviews and has been complimented by the likes of Guthrie Govan, Greg Howe, Nita Strauss, Alex Skolnick and David Kilminster. Young Guitar Magazine has included Irene in the "Heroines of Now" column in 2014 and she has been featured in numerous publications such as Guitar World, Guitar Interactive and the Sound Guitar Magazine.

Irene rose to fame in early 2010 with her YouTube video of "Rambler", a track that landed her a place to perform live in front of Steve Vai at his Guitar Nation Masterclass in London later that year. She graduated from London's Institute of Contemporary Music Performance and was busy working as a tutor for the International Guitar Foundation summer courses. During the next few years, Irene worked as a session player with various artists from pop (Red N Pink, Cherry Lee Mewis), country (Colm Kirwan, Victoria Shaw, Heidi Feek), hip hop (AKS, J The Exodus), metal (Gravil) and toured extensively with female tributes The Femones (Ramones) and Back:N:Black (AC/DC).

In late 2013, she relocated to Greece, where she spent the next couple of years promoting her solo album release, working as the lead guitarist for Philippos Pliatsikas's show "The other side of blue" and touring with pianist and singer‐songwriter Lia Hide. Eternally in love with Satriani's music and inspired by the G3 tours, she ran and performed at the first Guitar Experience Festival in Athens (2016) with guitarists Anthimos Manti and Sakis Dovolis.

In May 2018, she released her second solo album "A Sky For All", a progressive rock record with mixed blues, fusion and post rock moments, and inspired by real life events. The recordings took place at MD recording studio in Athens, Greece and feature Michael Kapilidis on drums, Kostis Vihos on bass, Makis Tsamkosoglou on keys and Babis Tyropoulos on slide guitar.

Filmed in 4k with 6 cameras for the perfect angles.

Practice alongside the teacher with guided sessions.

Lifetime access. Download all files to your devices or stream online. Includes all videos, tabs and supplemental material.

Become a member and stream this course, along with 400+ courses from 100+ world-class artists.